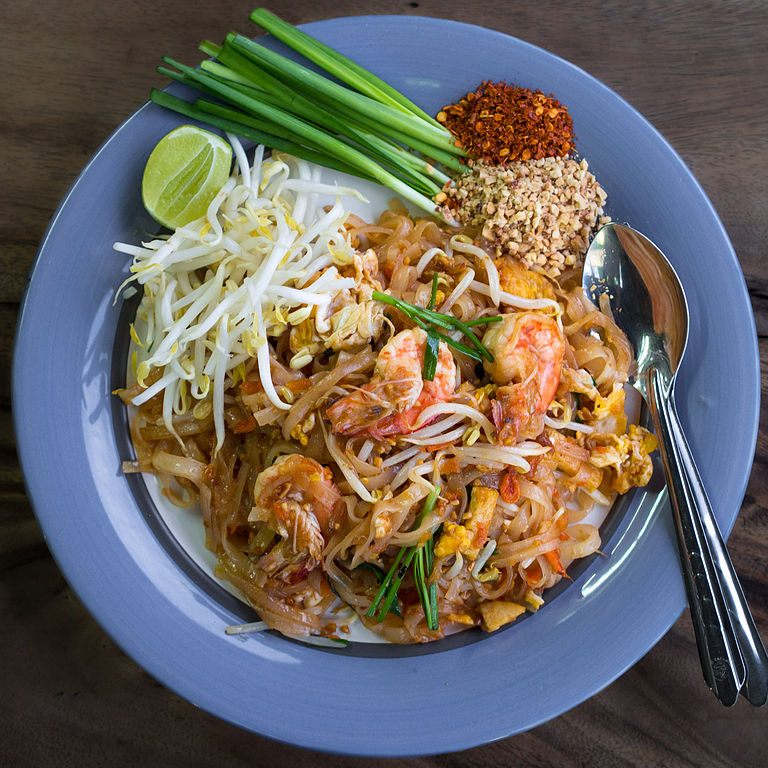 We believe that ก๋วยเตี๋ยว /gŭay-dtiăw/ came to Thailand in the reign of King Narai the Great; the king of Ayutthaya from 1656 to 1688. After the World War II, rice was in short supply and its price was higher. Field Marshal Plaek Phibunsongkhra, the leader at that time, tried to promote ก๋วยเตี๋ยว /gŭay-dtiăw/ as a lunch meal. Eating and selling noodles at that time was a strategy to drive the economy of the country. It has become so popular in Thailand since then.

Considering from the size of noodles, you can find 3 common kinds of rice noodles: เส้นใหญ่ /sên-yài/: the biggest size (around 1 inch wide), เส้นเล็ก /sên-lég/ the smaller size (a few millimeters wide) and เส้นหมี่ /sên-mèe/ slightly lighter than anglehair pasta.

Due to the nationalistic campaign at that time, the leader did not want ก๋วยเตี๋ยว /gŭay-dtiăw/ to have an image of China. That’s why, Pad Thai was born. In order to differentiate Pad Thai from Chinese noodles, the authentic Pad Thai must not have pork as an ingredient. They believed that pork was the food for Chinese people. The noodles used in Pad Thai must be stickier than the common rice noodles. Adding sprout beans in ก๋วยเตี๋ยว /gŭay-dtiăw/ and Pad Thai is also firstly recommended at that time.

Nowadays Pad Thai becomes one of the icons of Thai food even if it is made of noodles.